Dozens of residents of a small, rural Ohio locale showed up at their local city council meeting last week to protest the inclusion of a drag queen in their city’s 2022 Christmas parade.

On December 2, the annual Hometown Christmas Parade was held in Bellefontaine, the seat of west central Ohio’s Logan County.

Among the 40 entries in the parade were two marching bands, a cement mixer decked out in holiday lights, Santa Claus, and a drag queen atop a jet ski.

This latter float was sponsored by The Olive Tree, a former café and event space that recently converted into a gay bar.

More than a month later, over 30 community members let the Bellefontaine City Council know that they object to this example of “metropolitan city culture” and want a resolution drafted to make sure it doesn’t happen again.

Neighbors Danielle Stefaniszyn and Devin Palmer say they represented more than just themselves when they spoke at the City Council’s January 10 meeting to demand a less inclusive 2023 event.

Stefaniszyn said that she and her husband have been “exposed to multiple metropolitan cities all over the country,” ultimately making Bellefontaine their home. She lamented that many small towns “adopt metropolitan city culture.”

“One way that this is happening is by bringing metropolitan city events and adult entertainment into these small communities,” Stefaniszyn said.

She said jet-ski float was an example of this, and that the presence of a drag queen could lead to “unintended directions and ultimately undermining one of the reasons others would want to move here.”

Palmer was more specific in her remarks, describing her difficulties in raising “God-fearing” children in modern society.

She alleged that her 10-year-old son “found a ticket during the parade with some content being advertised of a sexual nature” and that the float was “carrying a man dressed in provocative women’s clothing.”

“I understand that this is culture that is pushed to promote self-gratification, but one place it should not be is in a small town Christmas parade,” Palmer said.

She then said that the “many people” she represents want the city council to draft language that would create a standard of conduct setting guidelines on appropriate “costumes, outfits, behaviors, attitudes, language, music and dance moves.”

Blond Vanity, the Columbus drag queen who — despite Palmer’s claims of “provocative” dress — was clad head-to-toe in holiday attire atop the jet ski, said that she loved getting the opportunity to spread some holiday cheer.

She called it “unfortunate” that people have tried to cast her art in a sexual light and “brand an entire performance-based art from as inappropriate.

“At the end of the day, representation is so important for queer people young and old, and that’s the real reason we wanted to show up and be visible at that parade,” Blond Vanity said. “As a marginalized group, we will never have to stop fighting to be represented, especially in smaller communities.”

Tyler Berry, owner of The Olive Tree, has encountered rumors aplenty regarding the float in question. He says they are all patently false.

“There was rumors that [Blond Vanity] was gyrating on a jet ski,” Berry said. “As entertaining as that sounds, that never happened.”

As for the ticket advertising something of a sexual nature, Berry said he heard people say that he was passing out pamphlets to groom children.

“It was a candy cane that we passed out to adults advertising The Olive Tree and that all are welcome there,” Berry said. 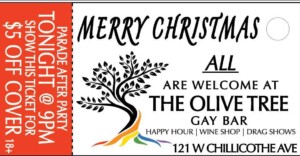 A promotional ad attached to candy canes given out to adults at the Bellefontaine Christmas Parade.

Onto the Next Meeting

Mayor Ben Stahler told the Bellefontaine Examiner that the city “could look at parade and community event rules and standards of other municipalities in an attempt to find a compromise.”

In response to The Buckeye Flame’s request for comment, Mayor Stahler provided the following statement:

Citizens, who were concerned about the appropriate nature of Christmas parade participants and materials being distributed during parades, presented their thoughts to City Council at our last meeting.  The next step will be for the appropriate committee to have further discussion.  As to guidelines, it is too early to provide any further comment, as there have been no suggested guidelines presented for consideration.

Berry is focused on the positive, highlighting that social media posts in December about the inclusion of a drag queen in the Christmas Parade reached tens of thousands of users.

“I received messages of support from all over the country,” Berry said.

The Bellefontaine City Council next meets on January 24 where residents expect that this issue will come up again.

Berry said he anticipates that there will be far more people present than the number seen at the January 10 meeting.

“Those were two women from the same street, and we’re really only talking one in maybe one hundred people who are saying something negative,” Berry said. “I wouldn’t be surprised if there are 100-150 people showing up to the next meeting to speak for inclusion.” 🔥

(This piece has been updated to include the statement from Mayor Stahler.)