Growing up in the heart of Columbus, Elle Moxley had big dreams.

“I wanted to become a cross between Whitney Houston, Mary J. Blige, and a lawyer,” laughs Moxley.

What she did not imagine was that her advocacy work would result in her serving as the executive director of a national nonprofit, land her a featured role on Oprah-related docu-series, and even secure her a spot on the cover of The Advocate.

Although Moxley admits that some of her incredible accomplishments weren’t on her Bingo card, she is thrilled that the exposure helps amplifies her Columbus background.

“It’s an honor to be able to put Ohio and Columbus even more on the map,”  she says.

As the founder and executive director of the Marsha P. Johnson Institute, Moxley is leading national efforts to protect and defend the human rights of Black transgender people.

The Buckeye Flame caught up with the multi-hyphenate model, storyteller, director and community organizer to talk about her work at the Institute, her penchant for action and what 2023 will hold for Black trans liberation.

I am an artist and dance is one of my art forms. And so I think it is my love of dance that has created a guide for me to constantly be moving. It’s very easy to talk about something, but it’s very hard to do something.

I have always wanted to have a meaningful, purposeful life, taking action in any way that makes sense.

Talk to us about being featured in The HairTales [a six-episode docuseries from Executive Producers Oprah Winfrey, Tracee Ellis Ross, and Michaela Angela Davis]. I have to imagine that it affected you deeply to make those connections between voice and identity and hair in the beautiful way that you did.

Absolutely. So much of my work has been around bringing people together and being informed and influenced by the culture that I was so thirsty for as a young girl growing up in Columbus.

Seeing Michaela Angela Davis whose face I could look forward to seeing in Essence Magazine. Or turning into Girlfriends and seeing Tracee Ellis Ross. Or every day after school being able to see Oprah — those were defining moments for me, personally and professionally. 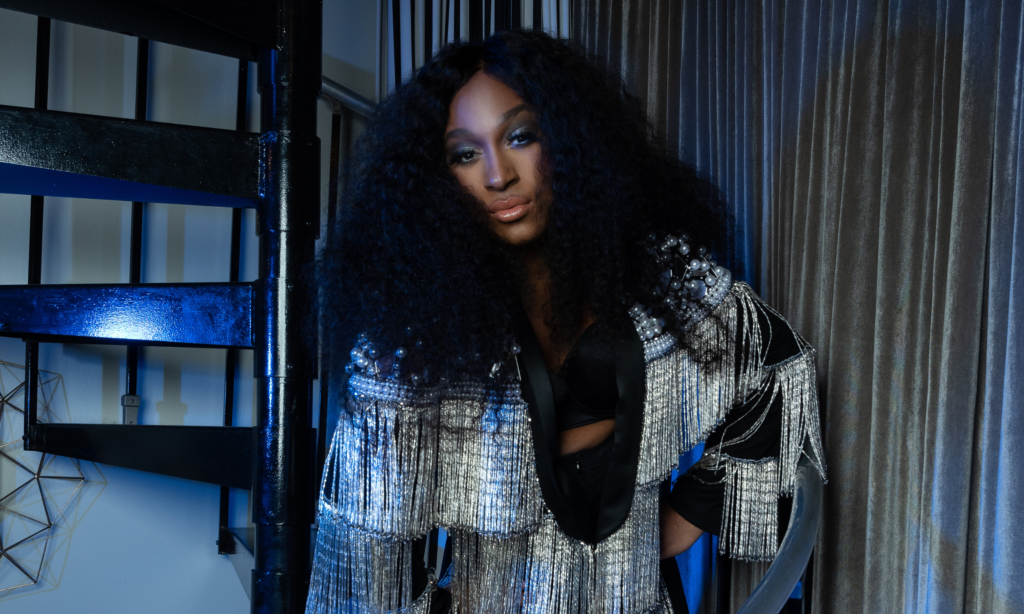 These are women I looked up to and aspired to. To then be able to centralize my voice and experience and knowledge to really bring more color and clarity to all of the Hair Tales that are featured really was the honor of a lifetime.

I met Tracee Ellis Ross and we’ve become good friends now and she told me, “I have a document of Elle quotes that I keep going back to,” and it was just something that was so transformative for me because I mused all the times about so many things that I never really considered would be enormous for someone like Tracey Ellis Ross.

It was confirmation that if you have something important to say, people will listen.

Why is there is not a Marsha P. Johnson Institute fundraiser that sells Elle quote cards?

Listen, we might need to bring you onto the fundraising team.

Don’t you tempt me with that! Let’s talk about more of your background. You’re pretty up front in putting in your bio that some of the inspiration of your work was sitting in a jail cell in Columbus. How important is it to you to be authentic about your past?

It’s very important, because I think there’s a misconception about how you get here to the glamorous part of this work. There are so many assumptions that are made about how you got here.

I was just someone who was surviving, which meant if I had to choose, I was going to choose myself.

I didn’t always have the luxury of having favorable experiences, experiencing homelessness and displacement and jail — those are certainly things that happened to me. I try not to make anything a secret, but I also try to make sure I can own the truth about my life.

That philosophy strikes me as being very Marsha P. Johnson.

[laughs]Yes! It’s part of the reason that Marsha has been such a centralizing figure for so many in the Black trans community.

For a really long time, the Black trans community was completely unaware of Marsha because we were unaware of ourselves. We had never been given the affirmation in society systemically or structurally or even in our families to feel that we weren’t alone. 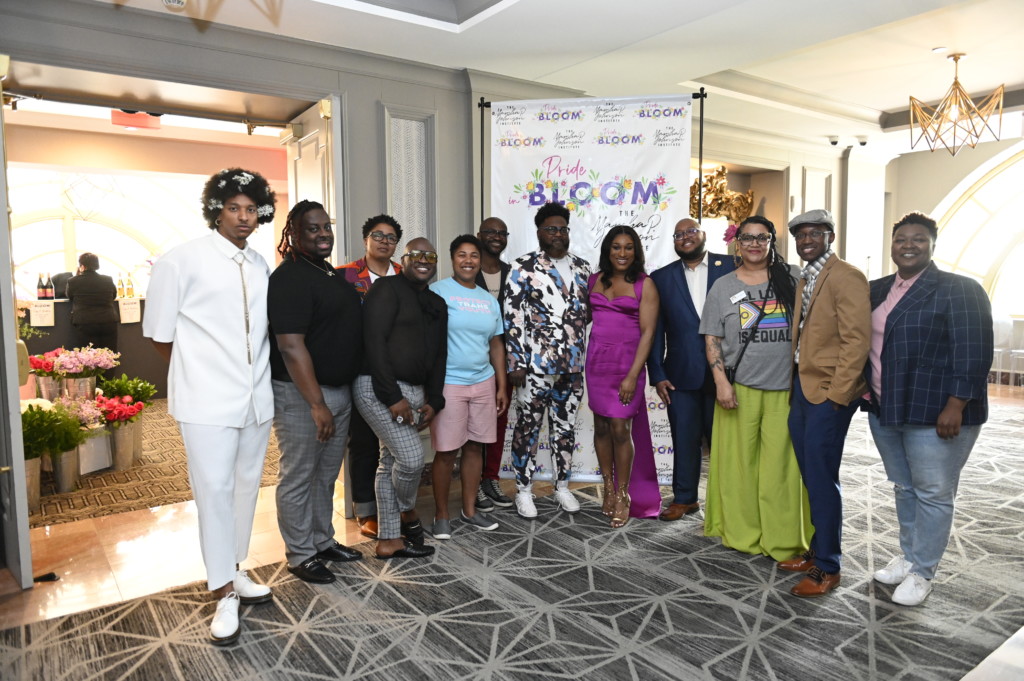 My voice is just a reflection of all of the women and all of the advocates and trans people who came before me who were very clear about who they were and who they wanted to be with other people.

If I sound like Marsha, that’s because Marsha as a movement figure is very much alive. Not just in me, but in so many who are finding themselves in movement and in society in general.

When you’re telling people about the Marsha P. Johnson Institute, how do you boil it down to what you’re trying to do in the world?

How we boil it down is very simple: we really want to create a world where Black transgender people can see and imagine themselves in it.

We obviously have different mediums to do that, whether that’s capacity building or advocacy or our artist’s fellowship or coalition building. We do these things because we want Black trans people to live longer, have more access to equity, and all of the rights that we all should have.

You’re doing this work nationally, but we’re here in Ohio where…it’s not great for the LGBTQ+ community, Elle. You have stories like Cleveland being one of the trans murder capitals of the United States. How do we translate the Institute’s work into Ohio where it might look a little different?

How I got started in the work was with the grassroots advocacy collective of Black trans women. We were aware of various murders of trans women in Cleveland and Cincinnati.

Advocacy in Ohio looks very different because it is such an electoral, political arena.  As you think about some of the resolutions around bathrooms and the passing of anti-LGBTQ+ resolutions around education,  it’s so important to connect those dots.

A lot of times you think these murders are happening in silos, or happening separately from the political process, such as what happened in Colorado Springs. But whatever the state rhetoric is, it’s typically either led by murders or murders follow. So for us, we always try to think as proactively as we can.

That’s the bigger picture. Ohio is certainly a very sanitized state, meaning you can go to any major city here and feel like it’s a great place to be until you actually live in it and you realize that these cities are very segregated cities.

Part of what I think is happening is that the safety we all felt is slowly but surely becoming more unsafe for us all. Whereas before it was trans women who were like, “Hey LGB community. We’re getting murdered. We’re having to do sex work and we’re homeless.”

That wasn’t understood here in Ohio. We didn’t have context for it. Now we have a context: OK, drag queens can’t read books to children at a church? Now the rest of the community is asking, “What does that mean for us?”

Now we’re in it together in terms of understanding hatred and violent attacks towards our freedoms. We now share a responsibility to transform that.

Talk to me about 2023 and the Marsha P. Johnson Institute. What are we excited about?

We’re excited about everything [laughs].

I’m looking forward to us all being alive and well in 2023, and really excited to show our Resource Map — which has resources for Black trans people across all 50 states.

Those are the things that bring me joy and being able to help people and  to have a better opportunity than maybe they did before.

Last question: For the little Elle that’s running around Columbus right now, what advice would you give her?

To hold on. Oh my goodness, to hold on — and to never compromise yourself, your dreams, your hopes or your love. Your love for anybody and everything.

You don’t have to settle. You do not have to accept less than anybody’s best. That was something I didn’t know. I thought I had to take what people gave me. I didn’t know I could have more.

I want the little Elle’s who are sneaking to read The Buckeye Flame, please hold on. All the sneaking and all that you have to do to survive, it doesn’t make you less worthy of love.