“My parents had a harder time with me leaving the Catholic church to become Episcopalian than coming out as gay,” says Dr. Ben Huelskamp.

Huelskamp is the Executive Director of LOVEboldly, a Columbus-based nonprofit that seeks to develop spaces where LGBTQ+ people can flourish in Christianity. 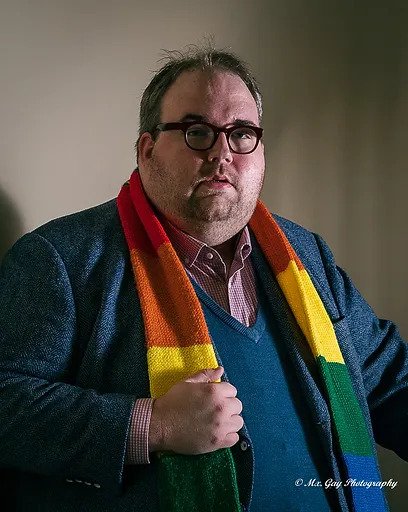 On January 19, LOVEboldly will be hosting a free webinar titled, “Queer Characters and Queer Readings in the Bible.”

Individuals of all faiths and backgrounds all are invited to attend.

The Buckeye Flame connected with Huelskamp to get a sneak peek into this intersection of queerness and Christianity.

How did you decide on this topic for the webinar?
I came across a book by a theologian by the name of Steve Harper, and part of the book was looking at a particular passage in Genesis 1 about how queer people could see themselves in Creation. Based on that, I developed a sermon on the idea of queer people being able to see themselves in Creation, rather than the Evangelical message that says that being queer is part of the fall, that it’s sin.

Harper’s argument was that LGBTQ people, like all things in Creation, were there before the fall. Therefore, God says that being queer is good, just like being heterosexual or cisgender, and there’s nothing inherently sinful about it.

I started looking at some other verses in the Bible that weren’t the stereotypical “clobber verses” we hear all the time. I started trying to see how I could find places where queer folks could see themselves in the characters or the themes in the Bible. So instead of focusing on all these negative verses we’ve all heard growing up, I wanted to focus on scriptures where we can read ourselves into the text in places that the Church has often told us we are absent.

Is this webinar open to people of all faiths?
LOVEboldly is a Christian organization, and the presentation will be through a Christian lens, but we would be more than welcoming and would love to see anyone who has any faith or no faith. You do not have to show your Christian card at the door. Please come, listen participate!

What can folks expect at the webinar?
I’ll be looking at about five texts and going through how we can see and read ourselves into the texts. A few are more direct and others are more thematic. I want to give the folks who come to this some LGBTQ affirming passages without touching on the “clobber verses” but are still close to scripture.

I’m not a Biblical scholar. I haven’t discovered an ancient text where it says in Hebrew that God is queer. I’m focusing on how we can read these texts. It’s much more literary than theological. It’s about interpretation, rather than academic translation.

So I’ll speak for about 45 minutes to an hour, and then the last half hour or so will be open for questions. As a standard practice, we record the presentation but the questions are off the record and not recorded.

Does that help people ask more genuine questions?
It does! We sometimes have people who come to us who are not out, feel like they can’t come out or are heterosexual or cisgender pastors who are afraid to ask questions. Having questions off the record makes it a safer place. I’m hoping we’ll have some folks attend who want to engage and have a discussion.

Not everyone has had a positive intersection of their queerness and faith. Can you speak to your journey?
I was raised Roman Catholic and attended Catholic schools for 13 years. I didn’t come out until college, and I was attending an Episcopalian college in the middle of nowhere, Tennessee. They were incredibly accepting, they wrapped me in a lot of love and compassion, and they made sure that I knew I could continue to engage with chapel and our chaplaincy program, which was a huge part of my life. It was a really good place to come out.

I drifted around different denominations for a number of years. I had intended to go straight into some form of ministry, but ended up in higher education for about ten years. After a decade, I was looking for a small nonprofit, hopefully doing something with queer people in the church. Around the same time, LOVEboldly was like, ‘We want someone who can do queer things in the church!’ We found each other and the rest is history.

I have been very lucky and privileged to have been in places where I could be as openly queer as I wanted to be and find churches, congregations, people who at worst were indifferent and at best celebrated queerness. I’ve also been able to avoid contexts where queerness wasn’t as accepted, and that comes from a lot of class privilege, racial privilege and gender privilege. 🔥

Caitlin Fisher is a queer, non-binary writer in Cleveland, author of The Gaslighting of the Millennial Generation, and prone to random acts of pep talk. They are also the host of the podcast Run Like Hell Toward Happy, a show that helps overwhelmed creatives achieve their goals without burnout.